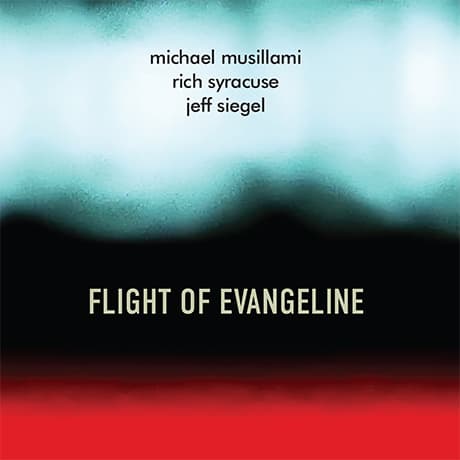 Flight of Evangeline is the fourth collaboration between Michael Musillami and Rich Syracuse on the Playscape Recordings label. Following three previous duo releases covering Shorter, Mingus, and Evans, Musillami and Syracuse had recently been planning on a new duo set featuring original music.

Musillami, Syracuse and Siegel entered the studios of Firehouse 12 in New Haven, Connecticut in October 2021. They had never played together as a trio prior to that date, though Musillami and Syracuse have had a long musical relationship, and Syracuse and Siegel have played together in various musical formats for years. However a few months prior to this recording, the three improvisers played in a quartet setting, and all three said they felt a strong creative connection.

Being a collective, each musician contributed short, melodic and angular melodies to expand upon. The trio didn’t rehearse before the session, though they did exchange some written parts prior to the date, with just a few first looks just prior to countdown.

From the beginning track, Flight of Evangeline, written for Musillami's granddaughter, you hear the depth of what 100 years of combined improvising sounds like. Musillami's guitar singing haunting melodies, Syracuse growling from the bass chair and Siege adding the sound of shells and an unexpected bird whistle to set the musical flight airborne.

“I'm so proud of this set,” said Musillami. “It's so gratifying to have no preconceptions going into a creative musical adventure and ultimately have it expand so beautifully and so musically unpredictable.”

“My relationship with Michael and Jeff happens to be very deep, and in different ways with both,” said Syracuse. “This allows for an honesty in the music, and the freedom to travel through the improvisation like we are all slightly in the future and are hearing it before we play… a fantastic place to find yourself.”

“Playing with Michael and Rich is a joy,” said Siege. “They have a chemistry from playing duo together for many years and being able to move in any direction at the drop of a hat. I was humbled and excited to join them in this new trio to see what would happen. I love the concept of developing short compositions and doing so in a manner that allows a lot of freedom. Michael and Rich's music provided a lot of content to draw ideas from and I hope the listeners will be as pleased with the results as I am.”

Flight of Evangeline was recorded by master engineer Nick Lloyd at Firehouse 12 in New Haven, Connecticut.