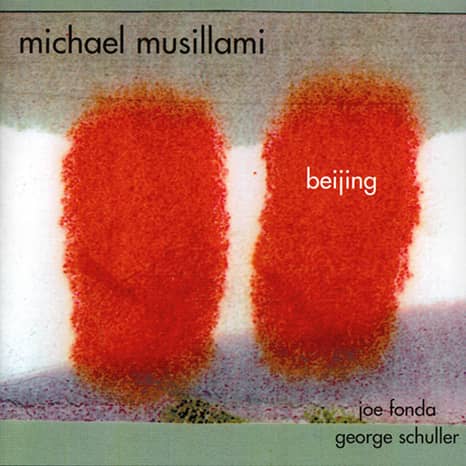 Michael Musillami - guitar, composer
Joe Fonda - bass
George Schuller - drums and percussion
Tracklist:
1. Jade Welcoming
2. Beijing
3. Dazu
4. Swedish Fish
5. Fragile Forms
6. Op-Ed
7. Mogao
8. Icons
9. Pivot
10. The Present
11. Caterpillar
Beijing
Michael Musillami Trio
Guitarist/composer Michael Musillami's first turn at the helm of a guitar trio finds him putting his own spin on this traditional format. Beijing showcases not only his trademark guitar sound, but new inclusive compositions with the ability to swing at the same time they embrace unusual meters, dissonant chords, and creative improvisation. Like the title track, inspired by the famous 1989 pro-democracy protests in Tiananmen Square, many of the compositions represent personal musical impressions of Chinese culture, ranging from sculpture to geography to the look of Great Wall of China from space. The remaining tracks include familiar Musillami tunes reinvented for this group and the late Thomas Chapin's The Present.

For fans of modern jazz guitar, Beijing is certainly one of the years' best discs.
— Bruce Gallanter, Downtown Music Gallery

Musillami sends out an unadulterated message that is very palatable while maintaining a challenging environment. [Beijing] is a vehicle for improvisers to kick things into a higher gear with enthusiastic, interconnected playing. Musillami, Fonda, and Schuller do just that on this performance that dares you to remain still while the disc is spinning.
— Frank Rubolino, AllAboutJazz

The trio date features arresting interplay between guitarist Musillami, bassist Joe Fonda and drummer George Schuller, and the session has a fresh, vibrant sensibility...Musillami pays close attention to dynamics and mood while displaying the frenetic touches, slithering lines, and dissonant edges that have characterized his other releases. Although Musillami's not performing conventional mainstream selections on Beijing, there's a peaceful, contemplative sensibility that emerges during his solos on the title cut and 'Op-Ed,' the disc's two longest pieces. Schuller and Fonda prove genuine collaborators who don't sit back and wait for Musillami to establish the pace, instead directly influencing each number through subtle rhythmic changes and adjustments.
— Ron Wynn, JazzTimes

...[Musillami] possesses an idiosyncratic style, partly due to his picking techniques and warmly executed tonalities. With this release, the guitarist leads his trio through a production, awash with a sense of intimacy via the artists' close-knit musicianship. Everyone participates, whether it's Schuller's sizzling rim-shots—emulating a Chinese percussion instrument—or Fonda's swerving, rock solid lines...count on Musillami to offer the willing listener something a bit different than the tried and true.
— Glenn Astarita, All Music Guide

Less constrained by harmony or the groove, Musillami has entered a realm of abstraction which fuels the fire in an entirely different way. Beijing unites Musillami with bassist Joe Fonda and drummer George Schuller, two familiar musicians who aptly straddle the gap between free improv and standard composition. The reduced size of a trio offers greater freedom to step around the usual boundaries, an opportunity eagerly pursued by all three players.
— Nils Jacobson, AllAboutJazz

...often aggressive and dissonant, but it is also beautiful—and it swings.
— Steve Greenlee, Boston Globe

When jazz is at its best, as it is on Michael Musillami's terrific new CD, Beijing (Playscape Recordings), you feel like you are eavesdropping on a conversation among the musicians. There is plenty of space in the trio’s airy improvisations, and Musillami seemingly cannot play a cliché lick on the guitar—he doesn’t so much 'play guitar' as he makes music on an instrument that just happens to be an electric guitar
— Seth Rogovoy, Berkshire Eagle

With every new project, Musillami asserts himself as one of the premier modern jazz guitar players on the current scene, and this very substantive trio recording does nothing to slow that forward thrusting momentum. He's a player, displaying an original voice on an instrument lacking in original thinking these days, who needs to be paid close attention to, by students, critics, and the general listening public. This might be his breakthrough recording as a leader. The bass playing of the underrated Joe Fonda also bears notice. One of my personal favorites for 2003.
— Michael G. Nastos, WEMU-FM, Ypsilanti, MI

Quietly, while many people have been distracted by flashier and/or better promoted guitarists, journeyman Michael Musillami has gone his own way and become a distinctive, exemplary stylist. Despite the traditional guitar trio setting, for the most part the three avoid the standard round robin of solos. Plus, even if they exhibit prodigious technique on the standard compositions and the few out-and-out pure improvisations, they aren't afraid to swing. This way Beijing should appeal to those who figure Joe Pass's trio efforts were the be-all and end-all of jazz guitar as much as improv fans that appreciate how the trio members can stretch the patterns with minimal distortion, yet still create extraordinary sounds.
— Ken Waxman, Jazz Weekly

One of the more imaginative guitarists in jazz and one who's put out more than his fair share of worthwhile recordings, Musillami is not as well-known as he should be. He's also a player who has shown a progression with each album he's put out. The album is brimming with good, solid, open improvisation based on strong, sometimes intricate compositions (another hallmark of a Musillami date)...Beijing is chock full of creative guitar work and creative trio interplay.
— Robert Iannopollo, Signal to Noise

Musillami commands attention, not with force but with sophistication and understatement, and bassist Joe Fonda and drummer George Schuller are co-creators in Musillami's captivating textures originating from varied cultural references...[he] has succeeded in combining true improvisation with accessibility and scenic depiction.
— Bill Donaldson, Cadence

For fans of modern jazz guitar, Beijing is certainly one of the years' best discs.
— Bruce Gallanter, Downtown Music Gallery

Each track has something to recommend it. This is music that keeps you guessing as to its direction even after multiple listenings.
— Richard Kamins, Hartford Courant