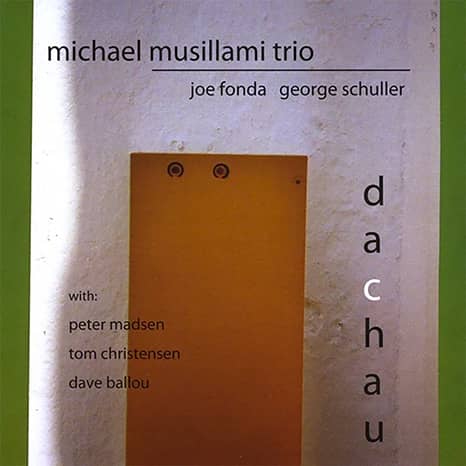 Michael Musillami - guitar, composer
Joe Fonda - bass
George Schuller - drums
Peter Madsen - piano
Tom Christensen - tenor sax
Dave Ballou - trumpet
Tracklist:
1. Dresden
2. Archives
3. Dachau
4. Part Pitbull
5. Rottweil
6. Today the Angels
7. Metaphor 3.4.5.
Dachau
Michael Musillami Trio
Dachau is the follow-up to the Michael Musillami Trio's 2003 debut, Beijing. The disc takes its name from the Musillami-penned title track, inspired by the irony that a city with such a disturbing past could be the site of one of the trio's most transcendent and life-affirming performances.

"From the first note we played in Dachau, the trio was elevated to a new level and seemed to mature with each measure," recounts Musillami to music journalist Ed Hazell in the liner notes. "We have always trusted each other musically, but there was a new level of courage simmering on the bandstand."

Hazell goes on to write, "From the evidence of this CD, that's no idle claim; this recording is a clear step forward from Beijing, the trio's first. They are as confident and swinging as ever, with the same beautifully balanced ensemble work and adventurous soloing. But there's something more - a greater sense of daring and a greater sense of support among the musicians. These two characteristics feed off each other and encourage a joyful testing of limits. You can hear the deep communication and the excitement of discovery from the very first notes."

...the music is certainly the most intense and power-packed collection Musillami has put his name on.
— The Penguin Guide to Jazz Recordings (8th Edition)

Working on an almost telepathic level, they have developed an innate familiarity with each other that enables them to second guess abrupt tempo changes and harmonic detours with split second timing. Bolstering this set of originals with a few notable guest appearances, Dachau is easily one of 2005's finest releases. Although the trio certainly doesn't need any help navigating Musillami's compelling tunes, they are occasionally joined by a few guest soloists, always to remarkable effect.
— Troy Collins, Cadence

On Dachau, his veteran trio, augmented on several tracks to a quartet, quintet or sextet, fuses a warm traditional sound with highly modern playing into a seamless whole...Michael Musillami demonstrates all that free music wants to live up to but often doesn't...a work of surprising musical cohesion and inventiveness.
— Renato Wardle, AllAboutJazz.com

While the compositions are intricate and well-developed, they frequently lead into open-ended intense improvisations. Both "Archives", with a surprisingly furious solo by Christensen, and the title track, which contains a particularly frenetic duo section for Christensen and Ballou, follow this pattern. The trio tracks are no less incendiary, driven by George Schuller's propulsive drumming. Joe Fonda's bass work is at his usual high caliber...His arco solo on "Dresden" is one of his finest on record.
— Robert Iannapollo, Signal to Noise

Regrouping with the rhythm section from his 2003 effort Beijing (bassist Joe Fonda and drummer George Schuller), Michael Musillami gives us the equally compelling ""Dachau"", the latest from his consistently excellent Playscape label. Exploring the space where avant-garde meets groove, Musillami leans toward challenging written themes, abstract and dissonant harmony and open-ended solo flights. Count on him also for that essential jazz ingredient, the sound of surprise...
— David R. Adler, JazzTimes

Blighted by its association with the nearby Nazi concentration camp, "Dachau" is the German city where ironically Musiallmi felt the trio members' musical ideas really fused. You can hear that in three of the selections, as the guitarist's unique chording structure brushes up against Schuller's unforced time-keeping and Fonda's throbbing bass line. With all hands on deck the title—and longest—tune surges from a beginning featuring moderato tempo chording and undulating stop-time fills from the horns, widens to include soaring trumpet grace notes and cascading runs from Musillami that speed up indolent theme variation, then reassembles into creating an evocative, multi-hued finale.
— Ken Waxman, Coda

Musillami's playing always seems to be outbound as if propelled by some centrifugal force, and the interplay between him, bassist Joe Fonda and drummer George Schuller is consistently heated, yet precisely calibrated. However, the trio's experience of playing in the city made infamous by the Nazi concentration camp caused their passions to be even more intensified on this album, and are quelled only occasionally by a deep-in-the-pocket theme or a soothing Coltranish rubato. Despite the rotating personnel, this is a very cohesive, persuasive statement that jazz's median point should move in Musillami's direction.
— Bill Shoemaker, PointofDeparture.org

"Dachau" is the sort of jazz album that should have critics of all stripes heaping excessive praise on. But if ever there was a release that deserved the hype, it would be this record. Full of ingenious interplay and heated improvisation, Musillami and company have given us, at the very least, the year's finest jazz guitar album.
— Troy Collins, One Final Note

The interplay among the three is so intrinsic that it’s not only impossible to tell who is reacting to whom, it’s irrelevant. When the guests are brought in to create denser textures—especially on the sextet title track—the bond between Schuller and Fonda is brought into even greater focus, as is Musillami’s clear direction...a musical universe with its own unique lyricism...
— John Kelman, AllAboutJazz.com

This is by far the best jazz guitar-based disc I've heard this year. The writing and the playing are both super!
— Bruce Gallanter, Downtown Music Gallery

WOW!! These cats are better than ever.
— James Cervantes, KWVA (Eugene, OR)

A winner in every way.
— Jerry D'Souza, AllAboutJazz.com

The Musillami Trio is tight and is in top form throughout, making this a thought-provoking and worthy release of advanced jazz.
— Scott Yanow, All Music Guide

Musillami, bassist Joe Fonda, and drummer George Schuller—augmented on four of the album's seven tracks with various combinations of tenor saxophonist Tom Christensen, pianist Peter Madsen, and trumpeter Dave Ballou—have created a work that, in a truly novel fashion, fuses composed material and free improvisation, limber ensemble drive and rubato expansiveness. Most impressively, Musillami and his fellow players do the almost impossible: while remaining rooted in a jazz vocabulary, they play here with an almost complete avoidance of stock phrases and licks. This is Musillami's finest recording to date, and one of the very best albums of this year.
— Paul Olson, AllAboutJazz.com