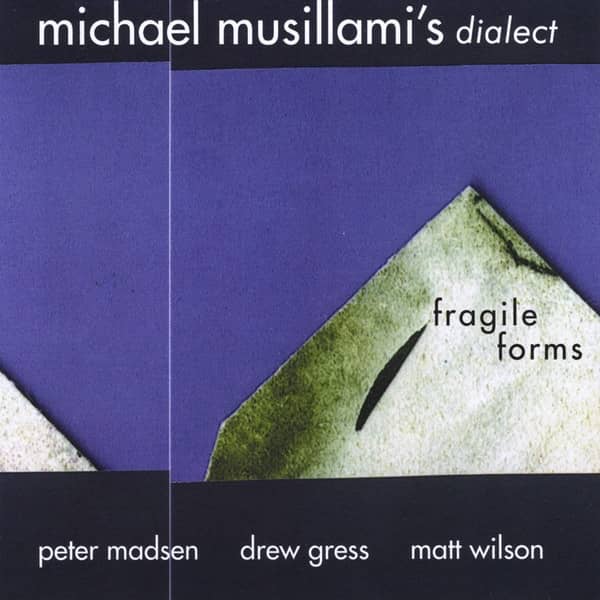 Michael Musillami - guitar
Peter Madsen - piano
Drew Gress - bass
Matt Wilson - drums
Tracklist:
1. Seven Blend
2. Brooms
3. Discreet Plucking
4. Emmett Spencer
5. Ernie the Neck
6. Robmac
7. Fragile Forms
8. Beijing
Fragile Forms
Michael Musillami's Dialect
Working under the banner of Michael Musillami's Dialect, Musillami's new all-star quartet with Peter Madsen, Drew Gress and Matt Wilson performs a mix of his newest original compositions and reinventions of previously recorded music. "Fragile, not the first word you might choose to describe music so angular and assertive," writes journalist David R. Adler in the liner notes. "But it's this very paradox that gives the work its vitality. It is full of grit and heedless of rules, but it has an internal coherence that only the most sensitive players could produce."

It's not difficult to hear the shared values, respect and trust this group exudes in exponential terms. Madsen shows his depth and substance throughout this CD in his brilliant solos and workman like partnership with Musillami on the complex melodies and shout choruses...this ranks with his very best.
— Michael G. Nastos, All Music Guide

It's not difficult to hear the shared values, respect and trust this group exudes in exponential terms. Madsen shows his depth and substance throughout this CD in his brilliant solos and workman-like partnership with Musillami on the complex melodies and shout choruses...this ranks with his very best.
— Michael G. Nastos, All Music Guide

Fragile Forms is great creative music played by 4 musicians who push, prod,and support each other so that what they create never feels static orconstrained. Instead, they pick up on the timeless quality of jazz—byblending melodies, harmonies and rhythms with all their life experiences(especially as musicians and students of those who preceded them), they givethe listener nearly 66 minutes of pure pleasure.
— Richard Kamins, Hartford Courant (See! Hear! blog)

On Fragile Forms, Musillami has concocted his best record yet, a rhythm-centric excursion by a stellar group that includes pianist Peter Madsen and the top-shelf rhythm section of bassist Drew Gress and drummer Matt Wilson. Musillami's intricate compositions are both thematically memorable and ear-grabbing due to their zealous playfulness. Surely folks will catch up with Musillami sooner or later as long as his future releases are this good and feature such fiesty compositions and cohorts.
— Jay Collins, Signal to Noise

...a stellar rhythm section and a compelling front line combo of the quirky Madsen and the underrated Musillami. What really strikes me is how memorable the leader's themes are, able to strike a fine balance between dense harmony and sweet melody...thankfully the frequent intensity of this group's music doesn't come at the expense of space.
— Jason Bivins, Cadence

The open-ended, elastic rhythm tandem of bassist Drew Gress and drummer Matt Wilson is perfectly suited to simultaneously ground and extrapolate on Musillami's quirky, angular compositions. Add pianist-provacateur Peter Madsen to the heady mix as harmonic foil to Musillami's inside/outside six-string work—part Jim Hall, part Dom Minasi—and you've got a remarkably vibrant quartet recording that challenges both players and listeners alike. A protean player with a prolific output over the past six years, Musillami can swing assertively in legit postbop fashion, as on "Discreet Plucking," but even within that fairly conventional rhythmic context his note choices are still unpredictable.
— Bill Milkowski, JazzTimes

What won me over to this record was neither the tempestuous improvising nor the aggressive writing—plenty of both, very enjoyable—but the track "Emmett Spencer." An elegant, rather traditional sounding ballad, it showcases the strengths of Michael Musillami's guitar and the thoughtful way that he and pianist Peter Madsen combine their sometimes incompatible instruments without relegating one or the other to a merely supportive role. The positive results of that understanding underpin the entire outing...guitar and piano work in beautiful close tandem, chording together and drawing brilliant shimmering lines.
— John Corbett, DownBeat

All leaders in their own right, Musillami's collaborators navigate these expansive compositions with focused dedication and exemplary group interaction. Another example of Musillami's ever-expanding versatility as both a writer and soloist, "Fragile Forms" explores the fine line between freewheeling, off-the-cuff improvisation and heady, structurally sound writing. This album is not just for jazz guitar fans, but for creative music fans of all stripes.
— Troy Collins, AllAboutJazz.com

...he just continues to astonish us with his playing and compositions.
— Bruce Gallanter, Downtown Music Gallery