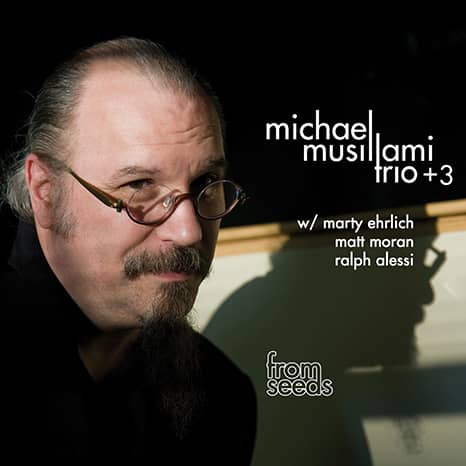 This newly formed sextet performs six new, original compositions Musillami conceived specifically for this ensemble. "Composing and arranging all new music for a cohesive group that combines vibes, trumpet, and alto with a guitar trio meant taking things to a whole new level," he explains. "I needed three players with the sound, experience and confidence to not only play this music, but also put their stamp on it without taking away from what the trio does best. Marty, Matt and Ralph were perfect choices."

Guitarist Michael Musillami has led many ensembles in his career, but he frequently plays with bassist Joe Fonda and drummer George Schuller in his long-established trio. On this track from last year's acclaimed album From Seeds, Musillami brings in trumpeter Ralph Alessi, vibraphonist Matt Moran and Marty Ehrlich on alto sax. The result is an innovative piece that glides between rich groove and intimate inventiveness.
— Alana Harper, WNYC Culture's Music Hub

Vibist Matt Moran, alto saxophonist Marty Ehrlich, trumpeter Ralph Alessi, bassist Joe Fonda and drummer George Schuller join guitarist Musillami in performing his creative, forward-thinking compositions. The music is exceptional in all respects, from the fiery but respectful readings of Musillami's tortuous compositions to the inspired solo work by one and all...Musillami is at his best when exploiting his nuanced quasi-acoustic sound, as he lays down long, unpredictable freeboppish lines. Alessi and Moran are excellent, and Ehrlich is brilliant—his playing here is fresh and impassioned.
— Chris Kelsey, JazzTimes

Guitarist Michael Musillami performs one of the best high-wire acts in jazz, walking the line between "inside" and "outside" without ever losing his poise. Seamlessly assembled and performed, From Seeds features not such a trio plus three as a fully realized sextet.
— Ed Hazell, Jazziz

Guitarist Michael Musillami has a tone that’s impossible not to love. On From Seeds Musillami has expanded his trio by adding saxophonist Marty Ehrlich, vibist Matt Moran and trumpeter Ralph Alessi. That makes for a potent sextet, and the guitarist’s writing provides a rich variety of settings.
— James Hale, DownBeat - 4.5 stars

Musillami's abilities on his electric guitar are without parallel. And there is no question that he feels every note that every instrument makes. From Seeds is a continual show of fireworks.
— Lyn Horton, AllAboutJazz.com

Guitarist/composer Musillami continues his impressive string of recordings with this fine CD. If you have been impressed with the guitarist's mature and intelligent compositions, here are six more. From Seeds is an aural delight, one more stellar recording from Michael Musillami.
— Richard Kamins, Hartford Courant

There are too many marvelous solos throughout, especially by Mr. Musillami, to describe here but I will say this: thoughtful listeners will be at the edge of their seats from the beginning to the righteous end of this fantastic disc. It doesn't get any better than this!
— Bruce Lee Gallanter, Downtown Music Gallery

Guitarist Michael Musillami's trio, with bassist Joe Fonda and drummer George Schuller, is some seven years old and thus a thing of great musical closeness, but in this case a doubling in the size of the band results only in musical pleasures. That result is aided in no small part by the distinctiveness of Musillami's compositions, which are brought to life by a band with a deep knowledge of his methodology and what it takes to make an impression. They unselfconsciously avoid every cliché in the book, and repeated listening is passed with aplomb.
— Nic Jones, AllAboutJazz.com

The core trio's bright interplay still crackles with intelligence and fervor, but it's expanded here in this even wider textural and color-filled landscape thanks to the interactive, creative voices of Musillami's three additional shipmates. In this highly-charged, classy six-ring circus approach, the music continuously unfolds in vibrant, shifting shapes, rhythms and harmonies, with everything cooking and cohering. As a courageous captain and wise navigator, Musillami, for all his great fire and energy, avoids excess while sailing to new discoveries on this rich, rewarding journey.
— Owen McNally, Hartford Courant

Moving further into the realm of truly original modern creative music, [Musillami] continues to assert himself not only as a very competent performer, but especially as one of the most innovative composers on the scene. This sextet is potent, equally as able to turn on a dime, ride with the wind, or hop aboard a freight train of steaming power and perseverance...a marvelous new music recording of great depth and vision that retains its vibrancy upon repeated plays...highly recommended.
— Michael G. Nastos, All Music Guide

These players are not only able to maneuver the tricky ins and outs of these pieces but also seem to be genuinely inspired by them...throughout, the core trio functions as a modern rhythm section should, almost telepathically shifting tempos, driving soloists, creating the space to support the added heft in the frontline. As much as any of their trio dates, From Seeds shows Musillami, Fonda and Schuller to be one of the finest working units in jazz today, with or without the “+3”.
— Robert Iannapollo, AllAboutJazz-New York