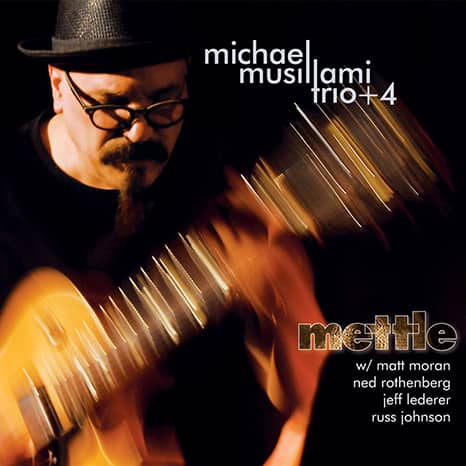 For 10 years now, guitarist Michael Musillami has had the kind of hand-in-glove fit with drummer George Schuller and bassist Joe Fonda that is truly rare in jazz. Mettle is Musillami's most ambitious and exhilarating effort to date.
— Bill Milkowski, JazzTimes

The criminally underrated guitarist Musillami celebrates the tenth anniversary of his trio by inviting along four friends for a sterling set of vibrant post-Bop. The long suite that occupies most of the disc is at times reflective and spacious, as during the probing Musillami solo during "Iceland." The Piazzolla piece in particular is a hoot, and demonstrates to those who aren't following this group (and what's your excuse?) Musillami's compositional range. A fantastic disc as usual from Musillami.
— Jason Bivins, Cadence

The composer takes full advantage of his expanded palette, experimenting with the various combinations and colors that his guests provide.Mettlejoins the catalog as one of Musillami's strongest efforts yet, weaving his rubbery sound into a tapestry of clench-jawed blues, tart tango, and hip-hop inspired grooves.
— Shaun Brady, JazzTimes

Guitarist Michael Musillami knows about the art of mustering up a full sound in lean circumstances, as the head of a trio for a decade now, with comrades Joe Fonda on bass and drummer George Schuller. But for Musillami's new project with his "trio + 4" congregation, Mettle, the canvas goes large and the plot thickens, texturally and arrangementally, with the addition of three horns and vibist Matt Moran. All in all, Mettle tests Musillami's larger-scale music thinking and emerges as a fresh-sounding little big band adventure...
— Josef Woodard, DownBeat

Augmented by four of Downtown's finest improvisers, Musillami's expanded ensemble interprets a handful of intriguing originals, as well as his first extended suite, the autobiographical eight-part reminiscence, "Summer Suite: Twenty Ten." Bolstered by the stellar contributions of vibraphonist Matt Moran, trumpeter Russ Johnson and vanguard multi-reedists Jeff Lederer and Ned Rothenberg, Musillami and company embark on a bracing journey through some of the leader's most captivating compositions. Although blues, bop and swing are omnipresent influences, Musillami's writing ranges far and wide for stylistic inspiration, which includes distinctive interludes subtly informed by everything from tango ("Piazzolla On The Porch") to hip-hop ("Thuggish Mornings").
— Troy Collins, Point of Departure

Each piece in the suite tells a story, creating an engaging compendium of musical memoirs that you can listen to straight through in one sitting or tune in to at different times as separate pieces. Sweet pleasures are derived either way you choose to listen, thanks to the quality of the composing, arranging and the soloing and collaborative efforts of this happy band of brothers...the Gold Standard for smart, vibrant chamber jazz groups to measure up to.
— Owen McNally, Hartford Courant