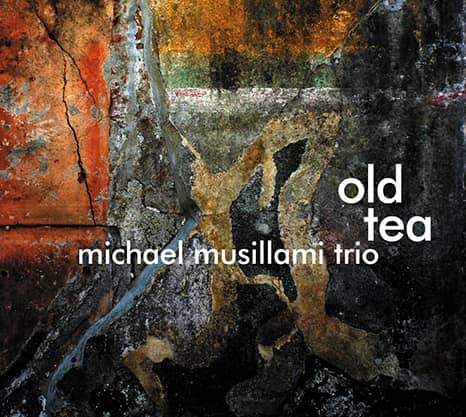 As a tribute, it is a worthy one indeed featuring interesting tunes and dedicated playing from a fine guitarist. The leader has found excellent partners in his choice of Fonda and Schuller, with Fonda displaying nimble virtuosity on the bass and Schuller displaying both power and imagination from the drum chair. One admirable aspect of this CD is that neither Musillami's playing nor writing sound the least bit derivative or clichéd, yet this music is immediately accessible without resorting to extremes – a feat increasingly harder to pull off these days. Recommended.
— David Kane, Cadence

Great art often arises out of heartbreak and so it is with Michael Musillami's Old Tea. The resulting music is not elegiac or sorrowful; rather, it is funky and joyous. Even the one overt memorial – the pretty, swinging "Evy-Boy" – feels more celebratory than mournful – though when the listener is aware of the backstory, vicarious pain seeps through the joy.
— Steve Greenlee, JazzTimes

Music is many things to many people, but one of those things is heartfelt personal expression, and this music is indeed beautiful and expressive. Performed by his longstanding trio of Joe Fonda on bass and George Schuller on drums, the 11 compositions are intricately composed modern jazz that make room for adventurous and, of course, expressive improvisation.
— Lucas Gillan, AccuJazz.com

...the music channels a variety of rhythms and moods and is consistently engaging...it is a fine tribute, running the gamut of emotions in music from joy to pain in a thoughtful and compassionate manner.
— Tim Niland, Music and More

With such musical lucidity and collective empathy, this group is doubtless a source of solace and an artistic outlet for this extraordinarily expressive guitarist.
— Glen Hall, Exclaim!

More than just a requiem, Musillami's compositions are simultaneously a lamentation for the loss of a son and a celebration of his life, vividly recalled in a series of 11 affecting songs that Musillami, a longtime Connecticut favorite, says are "like a prayer at a shrine." Musillami has never played with more impassioned eloquence, mixing moods of profound sadness with sonic snapshots of bright moments from Ev's life. His compositions provide a full, rich portrait of his son, capturing his irrepressible spirit of youth and the open-mindedness of "a diverse cat, a smart guy who would listen to everybody, from Béla Bartók to Tom Waits."
— Owen McNally, Hartford Courant

Guitarist Michael Musillami, bassist Joe Fonda and drummer George Schuller have long been one of the most tightly knit trios. But on Old Tea, they attain a new level of closeness. Recorded following the suicide of the leader's son, the album personifies support system. Drawing positive emotion and bounding energy from each other at a difficult time, the musicians sidestep sentimentality to deliver a moving and sometimes overpowering celebration of "a beautiful, brilliant kid."
— Lloyd Sachs, DownBeat

Expressing his emotions in music beyond words, Musillami plays with a concentrated intensity that is unassailable. The process of grieving encompasses a variety of emotions, and these cathartic outpourings are counterbalanced by poetic works of understated introspection and lilting swing. Despite the tragic circumstances surrounding its conception, Old Tea, a heartfelt and poignant work, stands tall in Musillami's discography.
— Troy Collins, AllAboutJazz.com

Old Tea is music born from a lifetime of memories and from emotions that can cripple many parents. Yet, Michael Musillami has created a program that celebrates life and the healing qualities of the creative process. By choosing to focus on the positive aspects of his son Evan, he creates a portrait filled with warmth and, yes, joy, but not cloying or sentimental.
— Richard Kamins, Step Tempest

Guitarist Michael Musillami composed the music for this program in the wake of his son Evan's death. The fact that it's measured and profoundly beautiful is testament to what music can do, and the fact that it's so superbly realized comes down to the fact that this trio is supremely empathetic. In thinking as one, all three players retain their musical identities in a fashion that's nothing short of extraordinary.
— Nic Jones, AllAboutJazz.com

Michael Musillami is a kinetic guitarist in every sense of the word. When he solos, his body moves, his fingers fly, and his melodies launch into the stratosphere. Comfortable in the large territory stretching all the way from hard bop to avant-garde, Musillami is especially effective when surrounded by the kindred spirits in his trio. Drummer George Schuller and bassist Joe Fonda are so tuned in to Musillami's wavelength that when the group really gets going, it functions as a single living organism.
— Ron Netsky, Rochester City Paper

We've had this promo for about a month and each time I play it, me & Mike P look at each other say, "Holy sh*t!", this is THE disc. Musillami's writing is filled intricate hairpin turns and changes in direction. I dig the spirited interplay between all three members of this trio, as they make every note count no matter how many or how few they use. There is a consistent counter-balance between all three musicians as they work together as one seamless force, a tight tapestry of intricate notes. For those who treasure great jazz & jazz/rock guitar at its best, you can't do much better than this gem.
— Bruce Lee Gallanter, Downtown Music Gallery

Old Tea puts Musillami and the trio in a musically profound mode. The trio plays exemplary, fully interactive music but it is Musillami that soars highest. He puts forth an aural presence that has force and delicacy in equal measure. This is surely one of the guitar releases of the year and Musillami is a musician to be reckoned with. Listen to Old Tea and you'll hear why.
— Grego Applegate Edward, Gapplegate.com