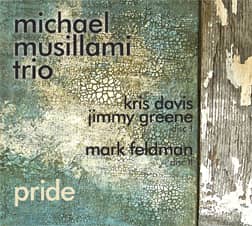 On Disc 1, Musillami's core trio, which has worked domestically and abroad since 2003, presents new material such as the Monkish Uncle Fino's Garden and blues inflected Courageous David B., along with trio staples Bald Yet Hip and Old Tea. This set captures the trio in a recent 2013 studio session, joined by pianist Kris Davis and tenor saxophonist Jimmy Greene. "I am especially proud of the addition of Kris and Jimmy to our 'thing'," writes Musillami in his liner notes. "They both speak naturally in this environment with grit, intelligence and passion. The patience displayed in this music is a comment on the maturity and life experience from all musicians involved." The session concludes with four movements from a recent Musillami commissioned work based on the children's book, Where The Wild Things Are.

Disc 2 documents the first live CD released by the Michael Musillami Trio. This set, recorded at New Haven's Firehouse 12 with violinist Mark Feldman, was recorded while on tour in support of the trio's 2007 Playscape release The Treatment, which was honored in The Penguin Jazz Guide's 1000 Best Jazz Recordings.