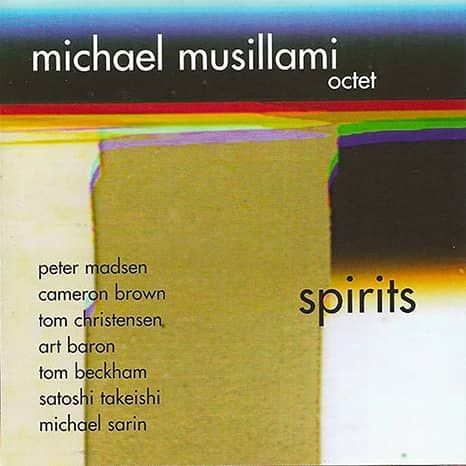 Spirits is his most ambitious project to date, featuring seven exclusive reinventions of pieces by the late multi-instrumentalist and composer Thomas Chapin. The group features many notable players, including former Chapin sidemen Musillami, pianist Peter Madsen, and drummer Michael Sarin.

Musillami's fresh version of seven of Chapin's complex originals move and groove from the start, with a firm foundation of drummer Michael Sarin (who worked extensively with Chapin in a trio setting), percussionist Satoshi Takeishi and stalwart bassist Cameron Brown. Everybody gets a chance or two to take the spotlight, and there's a lot going on underneath, with shifting combinations of instruments riffing behind the soloists. It's the right combination of players and material, smartly arranged and lovingly played; this one's a keeper.
— Stuart Kremsky, IAJRC Journal

"...music of solid craftsmanship that is not only played quite deftly, but with much conviction from all parties concerned."
— Marc Chénard, Coda

The Michael Musillami Octet shines throughout their new CD, Spirits, a tribute to the late multi-instrumentalist and composer Thomas Chapin. Inspired in part by Brazilian composers/musicians Pixinguinha and Hermeto Pasqual, Chapin's songs are a delight: the tunes are fresh and graceful, infused with a sweet enthusiasm. The octet creates a spacious, multi-layered sound that's always appealing and never overcrowded. For an eight-piece band composed of powerful, first-rate musicians, the octet manages to play quite gently, bringing the beauty of Chapin's songs to full flower.
— Florence Wetzel, AllAboutJazz-New York

The guitarist has brought a fine cast on board to realize seven of Chapin's pieces. Squid Fantasy, an ebullient quirky swinger that inspires a strong solo from Madsen, is the perfect way to open the tribute. Indeed the blowing is fine throughout, as one would expect given the impressive discographies of the principals.
— David DuPont, One Final Note

...an album that still surprises after numerous listens...Spirits is a world of its own full of sublime harmonies, world-percussion accented rhythm and horn shouts reminiscent of Impulse-era Mingus.
— Russell Carlson, JazzTimes

There is a constant rhythmic cohesion, even as the arrangements expand the body of Chapin's compositions and make room for the musicians to weave their spells. The fluidity and the easy interaction are evident right off. Musillami's octet tantalizes as it creates a resolute document of Chapin's music.
— Jerry D'Souza, AllAboutJazz

...an interesting revelation...everyone sounds completely at ease with this more groove-oriented, theme-based music. Kudos to Musillami, who arranged all the material with the exception of one track each by Baron and Christensen; clearly he sees something in the material that others have not.
— John Kelman, AllAboutJazz