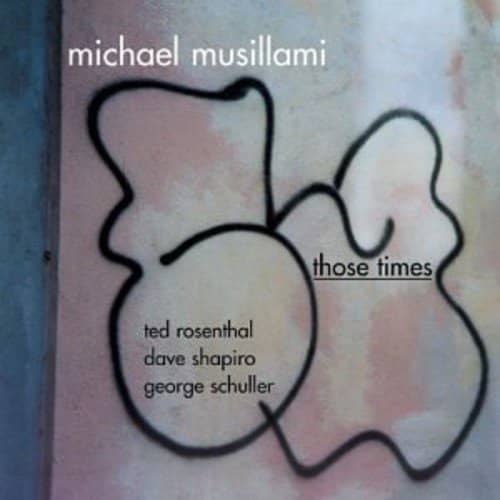 Tracklist:
1. Comrade Conrad
2. Peace
3. Angel Eyes
4. Those Times
5. Out of Nowhere
6. Beatrice
7. It Could Happen to You
Those Times
Michael Musillami Quartet
Versatile guitarist Michael Musillami follows-up his acclaimed release, Beijing, with the debut recording from his all-star working quartet. A bit of a departure from his many recordings of more experimental original music, Those Times showcases Musillami's ability to interpret music as a guitarist and bandleader. Each of the pieces selected, ranging from the standard It Can Happen to You, to Sam Rivers' Beatrice, has influenced him throughout his two decade career. "These melodies are part of my musical personality," he writes in the liner notes. "I love playing the standard jazz repertoire."

Starting with Bill Evans' seldom-performed 'Comrade Conrad', the group establishes a swinging environment from the first note. The exuberant George Schuller on drums and steady bassist Dave Shapiro keep things rolling along, supporting sparkling interplay from Musillami and versatile pianist Ted Rosenthal. A tender version of 'Angel Eyes' and a spirited look at Sam Rivers' classic 'Beatrice' are among the highlights of this recommended session.
— Stuart Kremsky, IAJRC Journal

First of all, he has chosen a superb mix of tunes, from Bill Evans' 'Comrade Conrad' and Sam Rivers' 'Beatrice' to a couple of chestnuts including 'It Could Happen to You' and 'Angel Eyes'. Second, the arrangements are rarely conventional, with the melodies often merely hinted at.
— Steven Loewy, Cadence

...the guitarist understands the music well and interacts very intuitively with the other members of his quartet. His strength has always been group dynamics, and this record is no exception. The best thing about this record, other than the usual solid group interplay, is the way the quartet brings out the character of these 'standards' without resorting to the usual cartoonish bluster...these tunes sound warm and familiar, like a blanket you'd throw over your lap in front of the fire.
— Nils Jacobson, AllAboutJazz

Schuller has a fleet, swinging touch on numbers including Matt Dennis's 'Angel Eyes' and Musillami's title track, and Shapiro drives the tunes in the pocket between Schuller's rhythms and Rosenthal's cleanly-articulated comping and solos...[Musillami's] playing steers clear of the clichés that afflict so many jazz guitarists. His fluid lines and patterns draw their inspiration more from horn players, and it shows.
— Seth Rogovoy, Berkshire Eagle

Again, even while treading ground covered often by others, he crafts the music with care, lending distinctive touches.
— David Dupont, One Final Note

Musillami's attention to musical ability and the chemistry of ensemble members allows him to consistently align himself with musicians who can tastefully interpret his repertoire while still putting their own stamp on it.
— Brattleboro Reformer

'Out of Nowhere' has a bright, swinging feel where Musillami sounds as if he is in his element. Rosenthal's voicings, though, provide the flavour, lending a touch of mystery to this venerable warhorse...Musillami makes the most of 'Beatrice' infusing it with a melancholy bluesy atmosphere that causes Rosenthal to sound more Monk-ish than Monk.
— Hugh Gregory, Jazz Review (U.K.)

An excellent modern mainstream guitarist, Michael Musillami at times recalls Wes Montgomery and Jim Hall, while his improvisations show the influence of pianist Bill Evans in spots. Musillami has an attractive tone, improvises inventively, and works particularly well with the quartet, especially in his interplay with bassist Dave Shapiro. The result is an excellent modern mainstream jazz date that features the underrated Michael Musillami and a fine east Coast rhythm section.
— Scott Yanow, All Music Guide