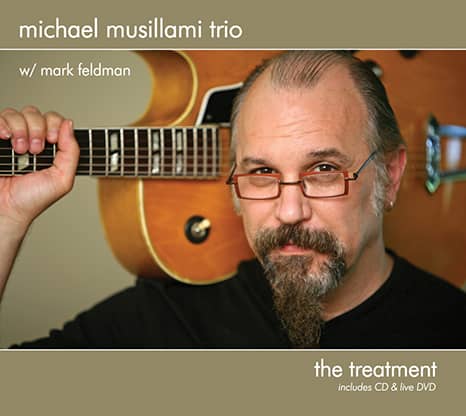 Michael Musillami - guitar
Mark Feldman - violin
Joe Fonda - bass
George Schuller - drums
Tracklist:
1. Brooms
2. The Treatment
3. Stark Beauty
4. Human Conditions
5. Mezz Money
6. Beijing to Brooklyn
The Treatment
Michael Musillami Trio w/ Mark Feldman
The Michael Musillami Trio's third release, The Treatment, documents the group's ongoing collaboration with violinist Mark Feldman. This two-disc set features a new CD with five brand new Musillami originals, as well as a live concert DVD documenting one of this quartet's live performances prior to heading into the studio in early May 2007. "I wanted to add Mark's voice to our group sound," Musillami explains, "and I knew he would work perfectly with us. Although my working trio is very much the foundation of this new group, all but one of the pieces recorded here was written specifically for this quartet."

...one of the most impressive releases of 2007...most certainly one of Michael Musillami's finest moments on record.
— Richard Kamins, Hartford Courant

Musillami has come on in bounds even since the last record, not least in his ability to integrate a new voice into the trio. This one is a minor modern classic.
— The Penguin Guide to Jazz Recordings, 9th. ed.

Musillami is someone who pairs tremendous technique with a great wealth of ideas as a musician and as a composer. Feldman is phenomenal as usual. But the rhythm section is the most important trump card of this group...they subtly steer many of the swinging solos of Musillami and Feldman with perfectly timed accents.
— Mischa Andriessen, jazzenzo.nl

...[Feldman's] wit, inventiveness and ability to dig into the rhythm mark him as an ideal Playscaper. This makes him a good match for the leader, whose playing is always appropriate but never predictable. It's great fun to listen to, and on the evidence of a very nicely done companion DVD, great fun to play, too.
— John Chacona, Signal to Noise

The guitarist’s six compositions provide Feldman with freedom, and he responds with some fiery, keening solos that contrast with his more circumspect work on John Zorn’s songbook or with guitarist John Abercrombie. Most striking is the 13-minute "Beijing to Brooklyn," which moves stealthily from Schuller’s rattling percussion intro to Musillami's moody solo over a pedal point, and concludes in a dervish-like outing by Feldman and a hard-driving guitar riff reminiscent of John McLaughlin.
— James Hale, Downbeat / 4 Stars ****

Musillami is a patient, chopsy guitarist, a straight-ahead yet probing improviser whose complex writing and playing shows evidence of lots of hard work. Likewise his trio with Fonda and Schuller is a close-knit and highly experienced unit. His compositions develop in leisurely style from quiet simplicity to intricate complexity, and the ensemble playing is civilised, sophisticated and clean.
— Jack Massarik, Jazzwise

Guitarist Musillami is really on a roll lately, documenting a number of high quality sessions on his Playscape label. On his latest, Musillami's longstanding trio is augmented by the always-exciting Feldman...from the get-go, there's great tonal contrast between the two primary players, with lively interaction suspended over the agile rhythms of Fonda and Schuller. A real winner.
— Jason Bivins, Cadence

The results are scintillating and provocative, striking a delicate balance between thoughtful, through-composed music and intuitive, freewheeling extrapolation...while there is a definite sense of discipline inherent in each piece, there's also a prevailing sense of unfettered risk-taking throughout. Their unbridled stretching on expanded versions of three tunes — "Human Conditions," "The Treatment," and "Brooms" [on the accompanying DVD] — further demonstrates the remarkable group-think of this empathetic quartet.
— Bill Milkowski, Absolute Sound

The music is challenging, but not daunting. It asks you to pay attention,but it doesn’t chase you away. I highly recommend this recording.
— Neil Tesser, Listen Here!

Here’s irony: This is music that's complex without being difficult, so approachable there's almost a need to wonder if it's not just a little too welcoming—shouldn't it be harder to deal with? The answers no, actually—it's to do with the perceptiveness of the participants, plus effortless techniques that the wealth of detail emerges so precisely. Plus, OK, a quite beguiling recorded sound.
— Jack Cooke, Jazz Review

Guitarist Michael Musillami’s new disc, The Treatment, is an adventurous program that's taken up a notch by the presence of animated violinist Mark Feldman.
— Time Out New York

...the real action happens in the solos—violinist Feldman couldn't play a banal phrase if he tried, and he brings puppy energy to the opening "Brooms", while "Stark Beauty" apes his more lyrical side. Fonda and Schuller are creative and sensitive by default...
— Philip Clark, The Wire

Feldman is a violinist of awesome technical and improvisational abilities, bringing a singular mixture of classical and avant to any project with which he is involved. Fonda and Schuller provide both depth and breadth—Schuller has never been so delicate without sacrificing his trademark intensity and Fonda is a sonorous glue, plucking and bowing all over his bass. As his ponytail and goatee have lengthened so has Musillami honed and formed his sound: idiosyncratic melodies, flawless technique and an energetic attack set against unusually-metered rhythms.
— Elliot Simon, AllAboutJazz-New York

Musillami sounds familiar — this is swinging jazz guitar, after all — but not quite like anyone else.
— John Garelick, Boston Phoenix

A resourceful, golden-toned guitarist and adventurous composer, Musillami is on a roll thanks to his excellent new recording, The Treatment, on Playscape Recordings...[it] crackles with a keen sense of interplay that never quits. Shifting tempos and charged vamps inspire bright, intelligent chamber jazz spiked with an emotional edge. Both formats [CD and DVD] catch the four quick-witted, empathetic players at the top of their game, as fluent in expressing emotions close to the heart as when exploring wholly new sonic turf.
— Owen McNally, Hartford Courant

The Treatment is his best record yet, and the chemistry of his trio – with or without Feldman – makes it one that more people need to hear.
— John Kelman, AllAboutJazz.com

Feldman, the most in-demand violinist of contemporary creative improvised music, fits in seamlessly with Musillami's veteran trio. Seeing musicians of this caliber in action makes apparent how intricate the ensemble charts are and how intuitive their level of interaction truly is. The Treatment represents an intensely rewarding and conceptually promising avenue for the future of jazz that is accessible and exploratory in equal measure.
— Troy Collins, AllAboutJazz.com

While the immediate draw here is the interplay between Musillami and Feldman, repeated spins draw you into the compositions themselves and the supporting players, Schuller and Fonda. Musillami has a knack of presenting his compositions in a highly digestible format. His complex writing never bogs down into distraction, largely due to a bright rhythm section that solos and accents with equal measure as the front line.
— Mark Corroto, AllAboutJazz.com

...this new recording is bloody wonderful. Definitely will be airing this CD a lot.
— Maurice Hogue, CKUW-FM

This is as convincing a statement of what's still possible with the instrumentation as anything I've heard in years. A stylish, compelling group, who’ll be worth catching whenever they get a chance to showcase this material.
— Brian Morton, PointofDeparture.org