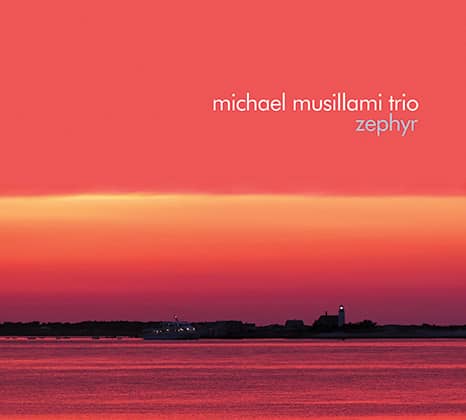 Although the finished product culminated in the studio, Zephyr's evolution began as the trio kicked-off a tour in March 2015 with brand new music beginning in Edmonton, Canada and ending in Lafayette, Indiana. From the first track, Loops, a tribute to the late bassist and long time friend Dave Shapiro, Musillami's music continues on a nostalgic path with memories of his childhood in Pacific School, and of family vacations in Lake Tahoe with Zephyr Cove, to the last track Remembering Dawn in memory of his daughter-in-law's mother, Sandy Hook principal Dawn Hochsprung. Traveling back from the tour and exhilarant from the enthusiastic response from listeners at every venue, the trio unanimously agreed this new music was ripe for further documentation. "We had rehearsals prior to the tour, but knowing where new music will take us is only ever realized on the bandstand," writes Musillami in his liner notes. "It was such an explosive tour that during the 14-hour drive back to NYC we were all in agreement that we should document this new set as soon as we could get into the studio." The trio's sense of urgency paid off and from the road Musillami booked a session just two weeks away at Firehouse 12 in New Haven, CT.